In 2003, 7 girlfriends and I went on a ‘city slickers’ adventure to a wild horse sanctuary. This article appeared in the Los Angeles Times in July, 2003. 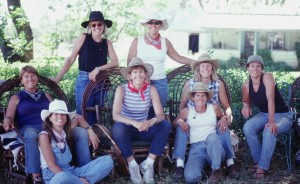 Looking the part before saddling up

Barely a hundred yards from the gates of the farmhouse, we spotted a harem of wild horses — sixteen mustangs grazing under the shade of an oak tree. Our guide motioned for us to stop so I quickly pulled on the reins; Ace halted immediately.

Without looking away from the harem, I gave him a pat on the neck then hastily felt for my camera in my satchel pack. The mustangs stopped grazing and turned to face us, just 30 feet away. Their beauty was stunning.

Black, brown, red and beige mares stood close to their foals; two colts lay sleeping next to a pregnant mare. Grateful that Ace remained still, I rapidly shot an entire roll of film.

The stallion of the harem stood protectively between us and his family. Wary of our group, he eyed us intently to make sure we kept our distance; any perceived threat and he may have charged, so we calmly retreated. Other than tails swishing at flies, the herd remained motionless, their gazes fixed on us until we were gone from sight.

So began our weekend as bona fide ‘city slickers’ at the 5000 acre Wild Horse Sanctuary in Shingletown. My seven girlfriends and I hoped to experience a bit of the old West as we embarked on our two-day pack trip into the foothills of Mt. Lassen in search of wild horses. Eight close friends on a weekend without husbands or kids. Yee haw! 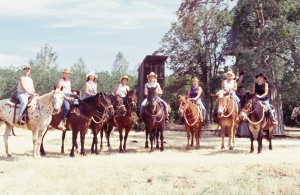 Saturday we drove southeast 30 miles, reaching the Sanctuary by 9:00 a.m. We met our trail guides and were greeted by Sanctuary President and co-founder, Dianne Nelson. She and husband Ted reside here in the over 100-year-old farmhouse, once the site of Shingletown’s circuit court. In fact, the oak “hanging tree” still stands in the front yard.

Once we signed waivers releasing the non-profit from liability (lest one finds herself under her horse), we headed for the barn where saddle horses stood tied to stable posts. Two of the animals were mules retired from Grand Canyon pack trips. All 15 saddle horses here have a history: some were rescued from slaughter, some donated, and others bought by the Sanctuary. Each is trained for trail riding.

From May through mid-October, two-day and three-day  trail rides are offered. Thankfully, experience isn’t necessary, but the Sanctuary prefers to screen riders under age 14. Since I’m ignorant where equines are concerned, my partner for the weekend was Ace, a gentle 18-year-old retired dude-ranch quarter-thoroughbred cross.

Heading out for our weekend adventure

Anxious to get started, we adjusted our stirrups, donned our new cowboy hats then headed through the gates into the open hills. Dianne led the way in our search for some of the Sanctuary’s 200 mustangs and dozen wild burros. Flanking us was guide, Karen, and horse trainer, Hillary.

Depending on where mustangs were last seen, we rode 16 to 20 miles a day, climbing 2000 feet to the cabins. Because the weather was mild (80’s), the ascent was pleasant, but temperatures can peak into the low 100’s during summer. Lava rocks from nearby Brokeoff Mountain litter the terrain; trails are framed with manzanita, black oak and white oak, their branches forming a canopy above our heads.

Although our horses passed unscathed beneath most of the trees, we weren’t always as fortunate. Patty, straddling exceptionally tall Big R, received the most souvenirs (tiny scratches). Whenever we heard loud cracking, Big R was taking Patty through low-hanging manzanita; usually she’d emerge wearing a limb or two, and a big smile. 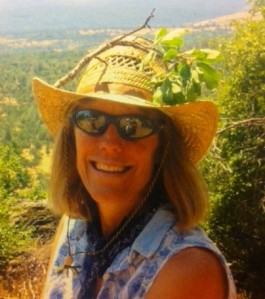 Here, delicate wild roses grow alongside resilient junipers. Fields of yellow and purple flowers bloom next to rocky paths and dry riverbeds. During spring, masses of color blanket the hills.

Our saddle horses were as individual as the terrain. Rita rode spunky Pathfinder, who always pushed his way to the front to be near Dianne. (They bonded when she hand-fed him at 3-days-old after his mother died.) Gentleman Ace was content to take up the rear. Bernie, the other mule, was a champion grazer. Harley liked to follow his pal, Quest. They were well cared for, seasoned professionals.

We stopped for lunch (sandwiches, fruit, chips and soda) near a tree-shaded pond then fed our horses leftovers. As we climbed, herd sizes dwindled, but rarely an hour passed when mustangs weren’t sighted. Occasionally we’d see them scrambling for cover when they heard us coming. We were an easy group to detect. Often traveling single file on narrow trails, we shouted questions up to Dianne or back to Karen, then hollered their answers down the line.

Around 4:00 p.m. we emerged from the woods into a meadow of soft yellow and lime-green grass. Five cabins and a cookhouse faced the meadow, framed by trees on one side and a pond on the other. While Karen and Hillary washed the horses, we shamelessly indulged in margaritas, chips and salsa.

Shannon, Loren, Mona and Averie, four more of the Sanctuary’s eleven volunteers, had arrived earlier in the day after trucking our gear to the cabins. By the time we appeared, they were busy fixing dinner. Loren barbecued chicken and tri-tip; the others shucked corn, cooked beans, baked rolls and chopped salad. 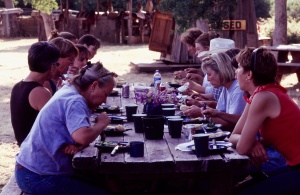 Sipping margaritas, we sat by the open fire and asked Dianne about the history of the Sanctuary. Although three others exist in California, this was the first to be authorized by the Bureau of Land Management to house wild horses; however, she says this one is unique because stallions, mares and their babies are allowed to live together.

“I don’t know of any other place that offers wild horses the natural, free-roaming life our Sanctuary does. These horses choose their own family and friends. Stallions can form harems, bachelors can bond in bands, and they all live safely without being harassed.” To Dianne’s knowledge, 11 harems and 7 bachelor bands live at the Sanctuary.

In 1978, Dianne’s lifelong passion for horses turned to activism when she purchased 80 wild horses living on public land that were scheduled to be destroyed because they were un-adoptable (over age 5).

About 47,000 wild horses still roam western public lands. Many are rounded up annually for adoption but more are captured than there are people willing or able to provide them homes. Consequently, those not adopted may spend their lives in crowded holding areas.

The Wild Horse Sanctuary rescues horses from various government agencies that gather them from desolate areas in Oregon, New Mexico and California. Believed to be descendants of Spanish horses brought to the New World in the 1500’s, they’ve come to symbolize freedom and power. Dianne works to continue their legacy while creating public awareness for the plight of captured wild horses.

While we engulfed our strawberry cheesecake at the long wooden table, Diane fielded questions. The sun was setting beyond the meadow, casting us in a golden glow. Bullfrogs croaked in the pond near the stables; the scent of barbecue smoke and dried grass mingled in the evening breeze; three mustangs grazed a short distance from our cabins.

The 5 wooden cabins were simple: two beds (our sleeping bags covered surprisingly comfy mattresses), a shelf, and an electric generator-operated lantern. Two bathrooms were in separate outhouses but had flushing toilets (yea!).

Relaxing in the “hot tub”

After hot showers inside a detached shack, we practiced branding benches with an assortment of irons placed in the fire. Luckily, mosquitoes weren’t a problem, something we credited to Patty’s secret weapon: fabric softener sheets sticking from our pockets.

When the lights went out at 10 pm. (the generator is turned off in deference to a neighbor over the hill) the night sky radiated with masses of stars, like sparklers against a black canvas.

Sunday we awoke to the aroma of strong “cowboy” coffee and a breakfast of eggs, potatoes, biscuits with sausage gravy, and fruit salad. After we packed, we headed down a different route to see both Mt. Shasta and Mt. Lassen from one look-out point. I hummed “Back in the Saddle Again” while cantering past squirrels, deer, and one particularly large rattlesnake. Hawks circled in the blue afternoon sky. At lunchtime, we ate our sandwiches near another pond — but not too near. This one had water snakes.

Back on the trail, the wild horses appeared. When we came too close to one harem, the stallion let us know by posturing and assertively advancing toward us. It was the only time we galloped all weekend but that was fine with us; the faster you go, the more you miss.

Often, we passed graveyards strewn with scattered bones of mustangs. In a way it was sad, but somehow reassuring too; the Sanctuary allows these animals to thrive by continuing to live the way they were born – wild and free. “They live here; they die here,” Dianne said.

When our adventure ended and we drove away from the stables, our horses were enjoying a hose bath while three recent rescues watched from a nearby corral. Soon they will be released back into the wild at this haven for horses, and Dianne hopes many more after them.

“We started 25 years ago with 80 hungry horses and little by little it’s grown because I found out we weren’t the only ones who cared. Other people care too, but they won’t know about it unless you tell them. So that’s my job — to tell the story.”