In July of 2002, I went camping and kayaking alongside orca whales in British Columbia. This piece appeared in the Los Angeles Times in May of 2003.

There is a place in the Canadian coastal wilderness that epitomizes my idea of heaven on earth. The islands dotting the Inside Passage, sandwiched between Vancouver Island and the mainland coast of British Columbia, are lined with western hemlock trees reaching into sapphire-blue skies.

The view from our campsite on the island

Bald eagles sit on treetop perches, their shrieks drifting in the saltwater breeze. Ravens soar overhead, their reflections mirrored in aquamarine waters that teem with whales, porpoises and seals.

It was here that I had one of those rare and fleeting moments that seem hard to believe even while they are occurring. On a remote island off the northern tip of Vancouver Island, British Columbia, nine campers and I waited on a rocky ledge 15 feet above a frigid inlet along a stretch of the glacier-carved waterway to Alaska.

We stood, cameras in hand, in anxious anticipation from an announcement on our two-way radio: “A super-pod is heading in your direction.” Leisurely winding their way through the passage’s maze of islands was a group of 72 orcas. Near the mouth of the channel a quarter-mile away, the whales came into view.

Through binoculars we tracked black fins slicing the placid waters. We heard them blow as they surfaced for air, showering the breeze with a mist of seawater. A few broke from the pod, drifted into our inlet, and then fanned out across Johnstone Strait. Four of the whales hugged the shoreline leading to our ledge. Showing off as they approached, they arched their tail fins high in the air before abruptly slapping them down.

Directly in front of us, three whales suddenly stopped. Then, one by one, as if on cue, they shot straight up like rockets, their massive bodies suspended in air. We watched, stunned into silence, as the three curious killer whales glanced our way before quietly disappearing back into the sea.

Only 300 miles south of Alaska, the Inside Passage feels exotic without being far from my Northern California home. My friend, Mandy Bauman and I spent six days here in July, on a kayaking and camping trip organized by Northern Lights Expeditions, an outfitter based on Vancouver Island for over 20 years.

One of the reasons I love wilderness adventure travel is that it’s unpredictable. A day spent kayaking among the Passage’s maze of islands is shaped by nature, your itinerary determined by tidal currents, the location of wildlife or the whim of the wind.

But I am not an experienced kayaker. Nor do I camp regularly. In fact, it’s been a few years since my 47-year-old bones have slept on the ground with a pad not much thicker than a fat slice of steak. But experience was not necessary on this trip, only a sense of adventure. That eliminated my husband. Along with his unnatural aversion to saltwater, he is no Daniel Boone. His idea of camping involves room service and cable TV, so I went with Mandy.

Our group of 10 campers and three young guides, Luke, Michelle and Joi (Japanese for Joey) gathered the night before our departure in the lobby of the Haida-Way Inn in the small logging town of Port McNeill on the northeastern shore of Vancouver Island.

Our guides gave us each five dry bags in which to stow clothing and gear. They were color-coded and printed with names of wild creatures so we could recognize our stuff. Mandy was “Black Bear.” The others had cool names like “Eagle” or “Wolf.” I, however, became “River Otter” — a weasel.

From the moment we met, our group had a comfortable fit, like old chums gathering after a long absence. My fellow campers ranged in age from mid-30s to 60 and came from both coasts of the U.S.

Amy and Ray Mathis had traveled from Florida; Alan Thompson, Beth Light, and Mike and Nadine Nielsen from Seattle; Rob and Kelly Easley were honeymooners from San Francisco; and Mandy and I from the Bay Area. Our shared appreciation of wildlife and the outdoors helped create an instant bond and we were eager to get started.

The next morning, a water taxi shuttled us 15 miles to Compton Island, where the Mamalilikulla tribe had lived for thousands of years. All that remains of their village is a blanket of crushed white seashells on the beach. Compton, like many of the numerous islands in the Inside Passage, is uninhabited by humans. It would be our camp for the next two days.

Before long, we realized this trip was not for sissies. There were chores to be done. Although our guides worked hard to indulge us, a willingness to pitch in was necessary if we wanted time for fun. We unloaded gear, helped carry kayaks, set up our tents and collected firewood. It was like being in the Boy Scouts, only without merit badges.

The Biff (an acronym for Bathroom In Forest Floor) was a short hike from our campsite along a rolling path cushioned thick as carpet with fallen needles from the canopy of fir and hemlock trees.

The trail was framed with rocks and by red ribbons tied to branches, so we wouldn’t get lost. We took showers — spit baths really — with solar-warmed fresh water that hung in plastic bags from tree limbs. Our guides were hardy souls, who took their biodegradable soap and bathed in the 47-degree seawater.

For breakfast, Michelle made Tasmanian French toast – a fabulous concoction of cream cheese sandwiched between bread dipped in butter and eggs, then grilled to perfection and topped with blueberries, peaches and syrup. Luke was a wizard with pasta and Joi created artistic dishes of vegetarian sushi and fancy desserts. Fresh water, coffee and bags filled with snacks were always at hand.

Although the food is sure to be wonderful, the climate is another matter. Camping along the Inside Passage is not for fair-weather vacationers. Rain is always a possibility here. The group before us had rain every day, but we were fortunate to have a dry week.

The mornings and evenings were cool so I wore layers of clothing: three shirts and a jacket, tights under shorts covered by long pants — but I tend to get cold in a sauna. By noon it was comfortably warm and I went sleeveless under cloudless skies.

Insects were not a problem either, other than an occasional mosquito trying desperately to enter our screened-in tent. It was a futile endeavor. Our little domicile was impervious to even the harshest elements, even if it didn’t always feel that way.

I am a light sleeper, cursed with an active imagination. One night I awoke to winds whipping through the trees and twigs dropping on our tent. Lying in the dark, protected only by a nylon cocoon and cotton sleeping bag, I envisioned the forest was falling or that we might become airborne like Dorothy in The Wizard of Oz. Come morning, hardly a leaf seemed out-of- place.

Though it could feel primitive, camping gave us experiences we wouldn’t have had in a lodge. At 3:00 one morning Mandy and I rose to use the Biff. As we left our tent, we saw the silhouette of Vancouver Island in the distance. Stars glistened like millions of stationary fireflies.

We stood, and as we inhaled the crisp salt air, a cruise ship appeared from behind an island to our right. Lighted from bow to stern, bedecked in strands of brilliant white light, it moved silently through the darkness on its way toward Alaska.

There were other magical moments: The sight of a thick sheet of fog sweeping over the top of Vancouver Island, rolling down the hillside like a blanket of white cotton batting. Or the sense of peace we found when waking to the hypnotic cadence of waves hitting the shore or listening to a bald eagle calling in a treetop high above the tents.

In early morning, we walked through tide pools, coffee in hand, while our guides pointed out anemones, limpets, sunflower stars, urchins and sea cucumbers only feet from our camp.

Heading out for the day

Each morning before paddling off in our bright kayaks, we gathered on the water while Michelle quoted from an inspirational passage, such as, “If I Had to Live My Life Over,” by 85-year-old Nadine Stair or “The Station,” by Robert J. Hastings. Our guides were encyclopedias on the region, and they educated us each day while we rowed through postcard inlets.

On our first day out, we practiced paddling the nautical mile around the 150-acre Compton Island. The two-man, 21-foot boats were surprisingly stable, especially when loaded with gear. Most of us were novice kayakers, but we quickly fell into a comfortable rhythm. 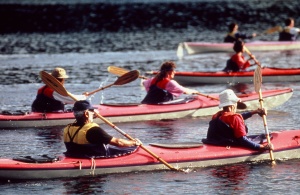 By the second day we began concentrating less on steering the boats through eggplant-colored sea kelp and more on enjoying our surroundings. We kayaked about six hours a day — 16 nautical miles — through glassy waters, paddling down Blackfish Sound and through Johnstone Strait. Along the way, we stopped for lunch on one of the many uninhabited islands of the Inside Passage.

Nearly everywhere we went we saw seals sunning themselves on rocks, salmon springing into the air or porpoises swimming under our bows. British Columbia has more than 600 species of birds and mammals. And of course, there were whales, which we encountered nearly every day.

Seventeen pods, totaling 190 orcas, inhabit the waters from northern Vancouver Island to the southeast tip of Alaska. Researchers can identify whales by the shape of their dorsal fins. In one of our first orca sightings we saw “Springer,” an orphaned juvenile that strayed into Puget Sound before being relocated back to her pod in the Inside Passage. She had become so fond of following boats that her surrogate mother had to gently nudge her back to the pod.

Whenever we heard the radio announcement that whales were sighted, we jumped into our kayaks quicker than firemen on a three-alarm call. Luke would drop a hydrophone into the water so we could hear them clicking and singing — incredibly moving vocalizations. One day we sat in awe as five orcas swam toward us. They were sleeping, pressed together on the surface in a horizontal line.

Because every inlet along the Inside Passage is unique, we moved camp on day three to Hanson Island to experience territory beyond a day’s paddle from Compton. Our campsite, Shaker Point, was near a rock outcrop overlooking Johnstone Strait.

At the end of our days, we congregated there and shared stories, lounged in the late afternoon sun or read. At night after dinner we gathered around a bonfire as Joi played guitar and serenaded us as we toasted marshmallows. 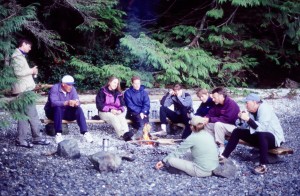 One of the highlights of this area is the luminescent plankton along the coastline, so a midnight paddle is a must. With the moon illuminating our route, we tossed rocks into the water and watched the plankton burst into a sparkling mass of color, like underwater fireworks.

On our last day, the winds were so fierce we couldn’t kayak, so we followed Luke on a hike to the top of Hanson Island. We picked salmonberries while he talked about the vegetation, land mammals, forestry and native culture.

On our return to camp we learned the water-taxi that was to take us back to Port McNeill would be delayed. While we waited, Joi played his guitar, some read, others napped. I sat on the rocky ledge savoring a panoramic view and thought about our six days.

After the Inside Passage, I’d say heaven has a hard act to follow.