This column was written in 1998, as MJ (Married Janet) 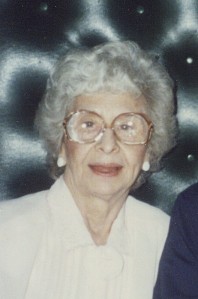 My husband and I returned recently from a visit to Missouri. Five of Jim’s six siblings came from throughout the country to celebrate his grandmother’s retirement. At age 84, she’s anxious to pursue other interests.

Mary Peterson, (Petey to friends and family) spent the last 40 years as the hostess of the well-known Kansas City restaurant, The Hereford House. Can you imagine having one job since 1958 and never once being late or even missing work?  Me neither.

Five days a week, Petey greeted everyone who came through those steakhouse doors. At about 4 feet 6 inches, Petey should be hard to notice, but rest assured, you couldn’t miss her. 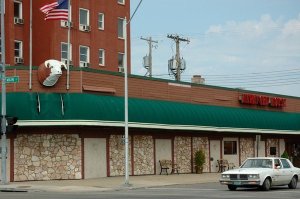 If Petey hadn’t seen you in a while, you’d be greeted with a boisterous, “Hi honey! Where the hell have you been?” If she really liked you, you’d get a big hug and a little pinch on the behind.

Petey has pinched more behinds than President Clinton ever did and not once has anyone complained. In fact, it’s just the opposite. One of the main draws to The Hereford House, besides their famous beef, was Petey.

Watching her in action was pure entertainment. I actually believe folks were a little disappointed when their table was ready because they were pulled away from Petey.

“Trouble” should have been Petey’s middle name and it was her goal to cause a little every day. At her retirement party, broadcast on the local evening news, 200 faithful customers and friends exchanged memories of her antics.

We learned that Petey had a penchant for exposing her leopard undies to unsuspecting waiters and was particularly skilled at snapping the waitresses’ bras. Isn’t it amazing what you can get away with in your 80s? Me? I’m just hoping I live long enough to try.

I admire Petey’s ability to see the humor in every situation. Jim’s family recounted when, as a teenager, he was out late one night with some high school buddies and desperately needed to use a gas station bathroom. Denied access, Jim peed in the bushes out back. The annoyed station manager promptly called the cops and he was brought to the precinct. 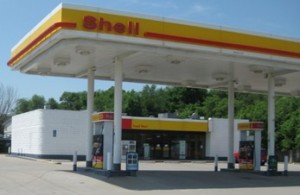 Scene of the crime

Afraid to call his father from the police station, Jim phoned Petey to come get him. Only problem was, she couldn’t stop laughing long enough for him to get a word in edgewise.

Petey treats everyone she knows like family, her customers included. If there was a special on the menu that she knew some patrons particularly enjoyed, she’d phone them with the news. She doted over the employees as if they were her own kids and they came to her with their troubles.

Now don’t get me wrong. Not everything Petey did can be printed here. But let it be known she was the queen of dirty jokes. And forget about being pretentious around her, she’d quickly bring you down to earth.

One of her favorite pranks involved a rubber chicken. At 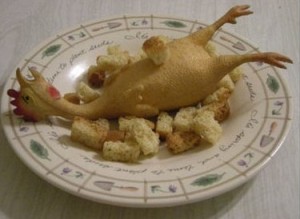 banquets, she sometimes placed the bird under the lid of the entree for the guest of honor and howled like mad at the startled reaction. With Petey around, someone was always laughing.

But now she has said her final “Bye, y’all” at The Hereford House and it won’t be the same without her. An avid poker and bridge player, she’s looking forward to spending her retirement playing cards with her friends and taking the occasional jaunt to one of her favorite hangouts – Las Vegas. 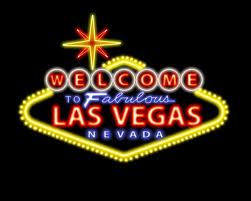 Grandma Petey embraces life. She doesn’t sweat the small stuff and makes sure she has fun every single day. I’ve always considered myself lucky to be part of her family. This weekend, I realized that 200 others felt just like me.

Footnote: Grandma Petey died in 1999, just a year after retiring. As was her style and her wish, her funeral was one big party complete with a marching band. They entered the cemetery playing her requested song, “When the Saints Go Marching In.” Lunch followed at The Hereford House. 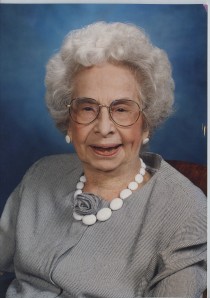