I imagine it’s also a bit like having a baby in the house, but I wouldn’t actually know – not having had one myself. I’m probably way off base even suggesting they’re remotely similar. So let’s just pretend I never made that analogy, shall we? Suffice it to say fostering takes perseverance. But in the end it’s definitely all worth it.

I’ve yet to name my newest foster. Here’s why: if he doesn’t become socialized enough to get adopted, it’s somehow easier for me to give him up to become an outdoor cat. I’d then acclimate him to his new digs through a process called relocation. That translates into a 3-week holding period on the property of the folks who have agreed to let him live in their yard. Once released, he’ll be given food, water and shelter while he also hunts rodents. It’s a win-win. Except for the rodents.

Naturally, I’m pulling for little Mr. No Name, hoping he’ll be a content domestic cat. But time will tell. He’s what we call a Skitty (a skittish, unsocialized kitten). I trapped him and his family living under crunched cars in a tow truck parking lot. They survived by dumpster-diving. Such is life for ferals without human intervention.

Anyway, this little guy has vocal cords to rival Mariah Carey. He only weighs a mere 2 pounds, yet he hits those high notes like a pro. The thing is, when I’m in the room with him, he’s silent other than hissing to demonstrate his dislike of my very existence.

But the second I leave the room, all hell breaks loose in that tiny throat of his. My friend Sue was on the phone with me when Mr. No Name was throwing a tantrum in his cage, like a kid wanting attention. She said to me, “Is that a cat I hear or are you sitting in an exceptionally squeaky chair?” Alas, I was not.

This little pistol is afraid to walk up and down the ramps in his cage to reach different levels. So yesterday I spent 30 minutes directing the laser beam so he’d place his paws on the ramp, then another 30 minutes for him to realize he can walk on said ramp. It’s exhausting working with tiny brains. But he’s oh-so-cute. I’d squeeze his cheeks if I didn’t fear losing my fingers. Unfortunately, I can’t hold my tennis racket without them.

Now don’t get me wrong; he and I are making progress. Each day he becomes less of a Skitty. But he’s still like an infant: he poops often and it always seems to stick to his butt. Then he cries. After that, I have to give him a butt bath. Then he cries again.  I dry him off, which he hates. You guessed it – more crying.

And just today, as he was following the laser beam up and down the ramps, he projectile-vomited like in The Exorcist, minus the head spin. Naturally, the flying yellow liquid landed on one of the ramps. That ramp is now washed and drying in the sun. And someone is none too happy about it because now he can’t figure out how to get to the next level in his cage even though he did it a mere day ago. Like I said, tiny brains… 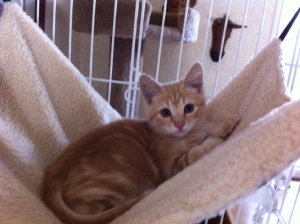 No worries; it’s all part of fostering these frightened little tykes. One day he’ll realize I’m not here to hurt him but actually someone he can play with, jump over, sit on and generally disturb to the point where I have to put him back in the cage to get any work done.

And that’s the day I’ll name him – when I know he’s adoptable. It’s my favorite day as a foster mom. It also makes me a little sad because I’ll have to give him up to go play with, jump over, sit on and generally disturb his new guardians. But then I’ll bring home the next little Skitty.

And that will make me happy all over again.

2 thoughts on “What Makes Me Happy”