You know how I’m always saying it’s meant to be? No? Well then it’s clear you don’t read my blog enough. That’s okay, I forgive you. People get busy, things come up…anyway, trust me here. My motto is:

So here’s the thing: Recently I thought I’d be adopting another dog until his previous owner changed her mind and reclaimed Charlie.

Shortly afterward, I fostered another cat. Nothing new there, right? He was foster #107.

Anyway, I trapped this big boy in Valley Ford, where I trapped 2 of my 3 cats. He was born feral and lived with a colony of 15+ behind the town hotel. Already a year old, he somehow became partly domesticated with no help from humans. I’ve never seen this happen. Right there he was special. But still, I hesitated to name him, thinking that would make it harder to give him up. 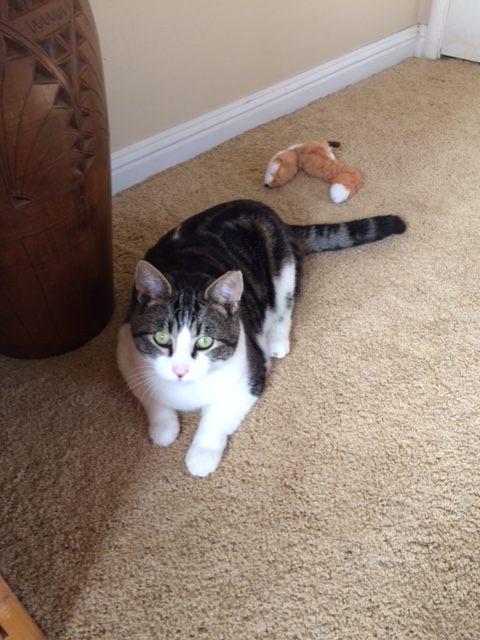 There are dozens of cats I’ve fostered that I easily could have kept. And like them, it was evident this guy would no doubt get adopted. But in the month I’ve been fostering him, I’m seriously hesitating to let him go.

Now don’t get me wrong. It’s not like he’s the cutest cat I’ve ever seen. He does, however, have inexplicably soft fur. Maybe his “it” factor is his easy going nature. It took him a week to adapt to living inside but he did it, eventually planting himself on a perch of the cat tree in my office.

Making himself at home

When he ventured out to meet my animals, he was a perfect gentleman. I couldn’t have scripted his behavior better. My other cats? Not so much. Not being greeted with exuberant acceptance from Oliver, Savannah and Tippi, he does the cat savvy thing and gives them space.

When Oliver swats him, he takes it like a boxer who has thrown in the towel; he never swings back. When Tippi hisses at him, his look of confusion is quite endearing. He and his colony lived copacetically, so conflict is new to him. But he’s a quick learner and more importantly, a pacifist.

Chumming up to Tippi

The dogs? They’re intrigued by him, following him from room to room. He doesn’t seem to mind, though. Nothing bothers this guy. What’s the deal with that? He intrigues me and the more I get to know him, I’m wondering if he’d like to live here. I feel myself caving.

He sleeps with me now, along with the rest of my crew. (Gotta love my king-size bed.) He curls up on the right side of my neck because Tippi has dibs on the left. So I’m essentially sleeping in a neck brace made of cats. 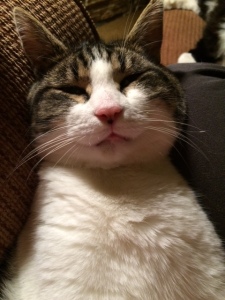 The other night I awoke to him sucking on my neck. Can you believe that? It’s my first cat hickey. (And hopefully my last.) He constantly head butts my face to nuzzle my cheeks. This is a cat who adores me.

On the down side, he tends to walk under my feet, so tripping is inevitable. He’s obsessed with his wand toy, insisting I play with him whenever I’m in his line of vision. 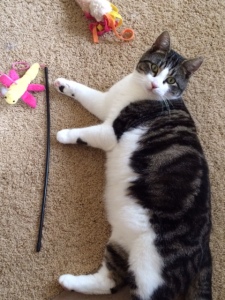 He climbs on the kitchen counters looking for food. He eats every meal as though it’s his last. Then he eats my other cats’ meals. This one keeps me on my toes. Speaking of toes, I no longer go barefoot because he attacks mine. What a character.

In other words, I believe it was meant to be that I couldn’t adopt Charlie because I was destined to have this guy instead. Everything for a reason. By the way, now that I’ve decided to keep him, I finally gave him a name. 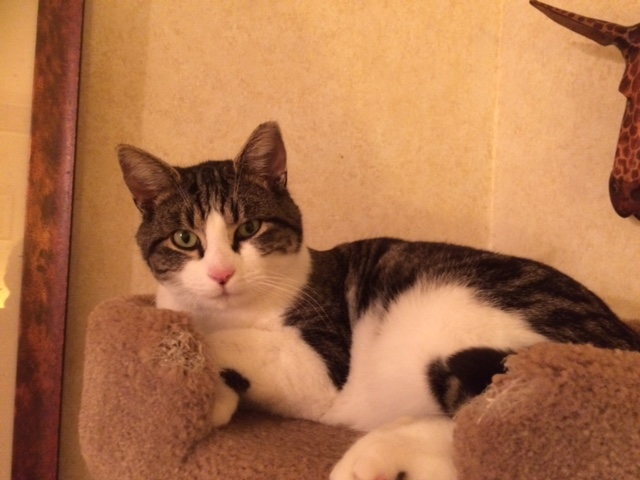