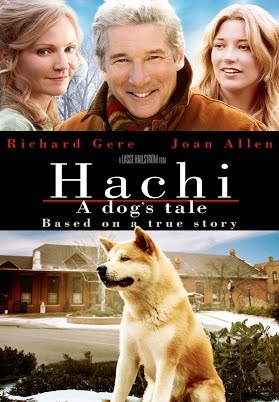 After a recommendation, I watched a movie called Hachi: A Dog’s Tale. It’s based on a true story of an Akita living in Japan in 1923. Hachiko (Hachi) was so devoted to his guardian, Professor Ueno, that for two years he walked him to the train station each morning then waited there for his return from work. Sadly, Professor Ueno died at work, never to return home on the train where Hachi still waited at the station.

But that’s not the end of the story; it’s really just the beginning. Death couldn’t break the depth of loyalty Hachi felt for his guardian. In fact, he continued his daily vigil for the next 9 years. A permanent fixture at the station, he became a celebrity of sorts. Hachi died near the spot he’d occupied all those years just outside the train station doors. He was 12-years-old.

Granted, the film took some creative Hollywood liberties. But the essence of Hachi’s tale is undeniably real. It epitomizes the extraordinary, deep connection animals and humans often share. For me, 30 minutes into the film tears welled, threatening to spill.

Hey, I defy anyone watching this film to retain a dry eye…simply impossible. Unless you’re a serial killer, which apparently I’m not since I watched a majority of the movie as though under water without the benefit of goggles. It was all one big blur. Besides, I wouldn’t want to know anyone not affected by this inspiring love story. Richard Gere starred as Hachi’s owner and even he admitted he cried like a baby simply reading the script. So there.

It’s no mystery I feel a connection to those of the 4-legged variety. Still, it’s very doubtful any of my 7 pets would wait in one spot for even an hour let alone 9 years for my return. I’m fortunate if my Greyhound gets up from the sofa to greet me when I arrive home from vacation.

Dogs and cats are in my blood. As a kid, my first dog was a curly-haired gray and white poodle named Charlie. I adored that dog. Charlie happened to be cute as a button. Now don’t get me wrong; I don’t believe buttons are particularly cute. But the saying implies someone once did, so there you go.

My first cat was a tabby we called Tiger. Very original, wouldn’t you say? Back in those days people often kept their cats outside, so sadly I never truly knew Tiger. He’s also one of only two of my pets of which I don’t have a photo.

Fifty years later, my affinity for animals is stronger than ever. Since my marriage ended, I’ve adopted six more pets; they help fill my empty spaces.

All told I’ve shared the company of 7 dogs and 10 cats, along with a steady stream of foster kittens. I couldn’t imagine living in an empty home. To me it would just be a house.

I, for one, relish the thought of coming home to exuberant 4-legged fur balls hopping around my feet in utter joy, delighted by the simple sight of me. Only our pets are that thrilled to see us when we walk through the door. Mine are no exception.

Except, that is, for my Greyhound who may or may not bother to get up from the sofa.

Hachi is buried with Professor Ueno