I can’t believe I’m old enough to say this but back in the day, whenever I left the house, I didn’t have a cell phone in my purse. That’s because they weren’t invented yet. Unlike today, I was able to function just fine without staying connected every second of every day to every human being I know. If I needed to talk to someone, I waited until I got home to dial them from our rotary phone. 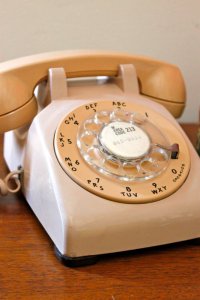 Yep, my family had a dial-up phone ages ago. Now don’t get me wrong; I wasn’t around in the day of switchboards like on the Andy Griffith Show where Andy has to ask switchboard operator, Sarah, to ring Aunt Bee for him. Please, I’m not THAT old! 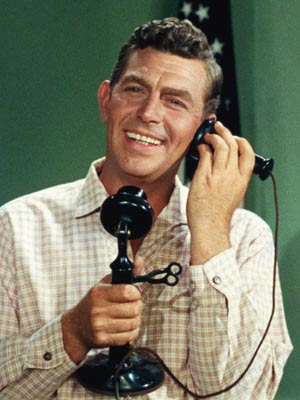 Anyway, our phone was beige with a long coiled cord that stretched from the kitchen nook into the dining room, where we sat and gabbed. But for many years prior, the cord was only 2 feet long so we had to stand to talk. This was also the day of party lines. Know about those?

We’d be having a conversation and suddenly hear someone else on the line. Who knows how long they’d been there or what they heard. Eavesdropping was common. And creepy, if you ask me. Worst of all, you couldn’t dial out if someone was already on that shared line.

Did she say what I think she said?!

Eventually push button phones replaced the dial ups. Exciting progress. And once again, ours was beige. What can I say? Mom had a thing for beige. Still, we were strapped to the end of that restricting coil.

Today I can’t I imagine not having access to my phone 24-7. It’s actually sort of disgusting. But it’s our reality now. God forbid I’d have to wait to drive home from tennis to tell Sue I saw Joan at Sharon’s and she looked fabulous. Waiting is torture; we want it here and now. Hurry up already!

Back in the day, when we made a call away from home, we used phone booths. The phone book was always missing and the phone itself usually broken. And germs? Those handles alone probably harbored enough bacteria to rival toilet seats. Handi Wipes hadn’t yet been invented so I’m surprised we all didn’t get dysentery.

So last weekend when I headed north to visit friends and forgot to bring my sidekick (my iPhone), I panicked since I’m in cat rescue and my phone is our main number. But I thought, I’ll only be away six hours.

As it turns out, quite a lot…

Back at home, I quickly found my phone and noticed it held a bunch of texts and phone messages. This isn’t unusual. But this message was: EMERGENCY! EMERGENCY! THIS IS LIFE OR DEATH! CALL ME!

Apparently one of six feral cats I’d relocated to a large property somehow wedged herself into a tiny space behind a metal structure that even a mouse would have difficulty squeezing into. Thankfully Orangie’s frantic wails were heard.

When I couldn’t be reached, the fire department was called. I was told 4 gorgeous firemen arrived minutes later. No, I didn’t actually see them, but being a hunk is practically a prerequisite for firemen. So I can safely say they probably looked like this, but with shirts…

Apparently it was quite the ordeal. But I was oblivious to it because I couldn’t be reached. And what did I learn from all this? My phone is like an American Express Card. Don’t leave home without it!

7 thoughts on “Don’t Leave Home Without It”