Since this week was crazy busy, here’s a post I thought you (meaning men) might enjoy reading again since it’s a subject near and dear to your heart…

Breasts, boobs, knockers, The Girls. Now that I have your attention, allow me to elaborate.

Recently some friends and I somehow raised (so to speak) the subject of breasts. I’m sure you’re thinking: Now how would that subject ever come up? Or maybe you’re thinking: finally, a topic I’m interested in! Regardless, bosoms are the focus of this week’s blog.

I’ve kept a journal since age 10. Recently, while reviewing the chronicles of my life, I came across an entry dated January 4, 1968. I was 12 and experiencing a traumatic event in my short life – it was my first day wearing a bra.

I was in utter disbelief that women wore what felt so suffocatingly restrictive and I wasn’t happy about it. But like most unpleasant things, you adapt, and a week later I completely forgot I was wearing one.

Breasts are interesting things, don’t you think? Personally, I don’t understand what all the fuss is about. Men in particular seem to be enthralled with them.

But when you think about it, breasts are simply glandular, soft, protruding organs consisting of lobes covered by subcutaneous adipose tissue. (How sexy.) 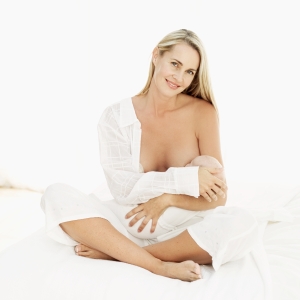 Other than feeding hungry infants, they’re otherwise relatively useless from a strictly functional standpoint. They do, however, help round-out a tank top.

Another benefit to The Girls is that they help disguise a bulging belly. How is that possible, you ask? Well, large breasts mean more material is needed at the top of a blouse, which means more material at the bottom. So if you have a bit of a pouch, that extra material covers the midsection, thereby hiding any evidence that you’re not particularly a fan of sit ups.

It’s interesting how American culture views breasts. Here, it’s illegal to go topless other than at nudist clubs such as the AANR (American Association for Nude Recreation) and at designated nude beaches. Otherwise, those babies need to be covered. 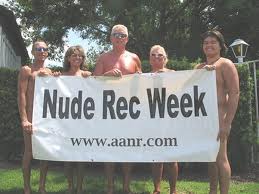 In indigenous societies, social conventions differ from ours with regard to covering The Girls. In these areas of the world, breasts are not viewed in a sexual manner. 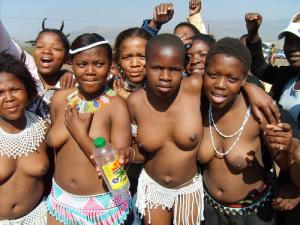 Since women don’t wear tops, their breasts don’t attract any more attention than their ears. In fact, I would argue that ears garner more attention if they’re adorned with rings that stretch the earlobes. Now that’s sexy in East Africa.

I suppose if women didn’t wear tops in America, the mystique would be gone. Then again, I’m not sure American men can handle seeing uncovered boobs on a continual basis. That might be asking too much.

But it’s not their fault; it’s been said men think about sex every 7 seconds. I think that’s hugely exaggerated. I bet it’s more in the 15-second range.

Now don’t get me wrong; I’m not saying I’d prefer everyone walk around sans adequate chest coverage. But that’s only because I prefer to leave some things to the imagination. And some things deserve that, don’t you think? Who wants to see a 44 E-cup without bra support? Let me just say it wouldn’t be pretty. 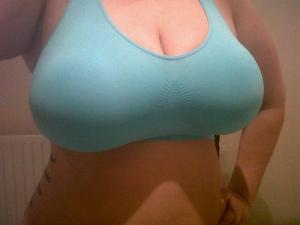 That brings me to what happens to ample mammary glands as you age. Sure, lots of folks seem to enjoy large breasts. But guess what? It’s true the larger they are, the harder they fall. A friend put it best when she commented that she’s no longer a size 34-B but is now a 34-long. I hear ya, sister.

Actually, bras are amazing at what they do but they aren’t miracle workers, you know what I mean? At some point those babies are gonna sag and there’s not much you can do about it. (I’ll spare you the accompanying photo.)

To quote John Mayer, “Gravity wants to bring me down.” And in the end, we know the Big G always wins. So why sweat it?

I say get yourself a Wonderbra and call it a day.