Today I want to do a little venting about movie theaters. Well actually, more like the people in them.

Last week, Mandy (my movie-going buddy) and I saw a new release at a local theater. So far, so good. It’s when people started arriving that it turned ugly.

Now, don’t get me wrong. I don’t have anything against people, per se. Hopefully, my degree in Social Work implies this. I do wonder, however, what it means that I chose to work with animals. But I digress…

Anyway, it seems whenever I venture into a movie theater, I become a magnet for the most annoying person in the place. Maybe I emit invisible vibrations that attract anyone slightly, how shall I put it? Wacko.

Take last night for instance. When the theater is nearly full, I know I’m probably doomed because the odds of sitting next to said wacko greatly increases. Even so, I held out hope. But then, 10 minutes into the movie, a couple sat to our right. That’s when the laughing started. 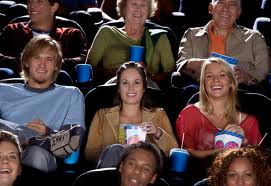 Now, I have nothing against laughter, except when it: (a) threatens to pierce my eardrum and (b) is capable of attracting a variety of wild animals. This woman’s laughter not only occurred during movie moments that simply weren’t funny but her hearing appeared to be on time-delay.

The scenario: An amusing line was delivered, everyone had a good chuckle, then 15 seconds later this lady would belt out an enormous belly laugh known only to members of the hyena family. Any dialogue said during her jocundity was lost to anyone within six rows. And yours truly sat two seats away.

Besides the talkers and the laughers, there are the 6’5” monsters who sit right in front of us directionally challenged people. (At 5’3″, Mandy shares my diminutive stature.)  We’re now able to determine, with amazing accuracy, who will sit in front of us; we simply spot the tallest person who enters the theater.

What do you think of the idea of having theaters invoke height limitations similar to those on carnival rides? If you’re over 6’2” you’re banished to the back four rows. Tall people have no vote on this. (Who said it would be fair?)

I’ve sat next to women who appear to be wearing a full bottle of their favorite perfume. On those occasions, I become rather proficient at breathing through my mouth, whereupon my nose becomes simply decorative.

And what about the people who talk throughout the movie? Don’t even get me started on that one.

When I’m in a movie theater, I seem to develop bionic ears. A man once sat behind me who constantly sniffed. In lieu of Kleenex, I’d have handed him my popcorn napkin if it wasn’t already coated in butter. One guy cleared his throat at five second intervals for 2 hours and 15 minutes. It was torture.

Recently, Mandy and I thought we had the perfect movie 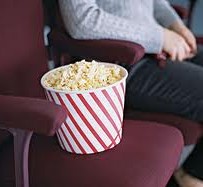 experience. We attended a matinee that had been showing for a while, so we were the only ones in the entire theater. Sweet. We got our popcorn, sat right smack in the middle of the place and high-fived our unbelievable luck.

Just as the previews ended, a rather tall man entered, surveyed the empty theater, and then sat in the chair directly in front of us.

As our mouths dropped open, Mandy pleaded: “You have got to be kidding!” Apparently he wasn’t, for guess who had to get up and move?

I gotta tell ya, Netflix is looking better all the time.

8 thoughts on “Next Time I think I’ll Rent”