In honor of Father’s Day, my blog today is more reflective than humorous. It’s adapted from an article I wrote in 1997 for the San Francisco Chronicle about the relationship I shared with my dad. Here’s to fathers everywhere…

There’s an image I have captured in my mind. I’m in my car in front of the home my parents have shared for most of their 45 married years. Mom and Dad are standing on the front porch. 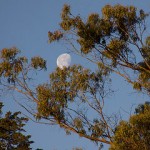 From the street, I can see the huge eucalyptus tree in their backyard, silhouetted against the evening sky. It’s gently swaying in the warm breeze while the full moon illuminates the manicured lawn. My parents are smiling and waving as I drive away after a visit.

Mom lives alone now that Dad is in an Alzheimer’s nursing facility, so that scenario has changed. But it never does in my mind. My parents always stood on the porch to wave good-bye when I left. Even in pouring rain, they still stood in the open doorway together. I always looked back and returned their waves.

Sometimes on humid summer nights, Dad would walk me

to my car. Often, he would stop along the path to grab the hose and give one last soaking to his precious lawn. Crickets would be harmonizing in full chorus and the dusk air smelled of sweet honeysuckle.

When cows from a nearby ranch came over the hill toward our house and the wind shifted, we’d have an interesting blend of scents. The cows have been replaced with condominiums now, but that familiar smell never fails to trigger fond memories.

On most nights after 5:00 p.m. Dad had a cocktail in one hand and a cigarette in the other. When he watered the garden, the cigarette hung limply from the corner of his mouth, the hose in one hand and  his “libation” in the other. There was simply no choosing between his vodka gimlet with a splash of Rose’s Lime Juice and that ever-present cigarette.

Soon after entering the nursing home, Dad forgot how to smoke. Sometimes I still expect to see that familiar red pack of ‘More’ cigarettes peeking out from his shirt pocket.

I picture Dad on those distant nights sweeping the hose back and forth across the lawn. He’s wearing the red and tan swim trunks he loved so much and practically lived in all summer long. 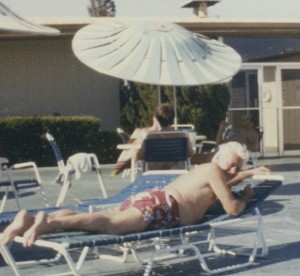 On those warm evenings, he’d be shirtless – the gold medallion around his neck lost in his chest hair. I never saw Dad without that piece of jewelry or else the silver St. Christopher medal Mom got blessed in church. On back was inscribed, “Bill, All My Love, Loretta.” He spent so many hours methodically rubbing it between his fingers while he watched TV, old St. Chris just about vanished.

In the nursing home, Dad can’t wear any of his favorite jewelry, like the fancy pinkie ring made with the diamonds from his mother’s watch, or his treasured retirement watch from the city of San Rafael. And although he wears a plastic alarm bracelet to alert staff if he wanders away, he doesn’t seem to notice it.

Besides the jewelry, Dad loved wearing flashy clothes. His idea of a great looking outfit included gray slacks, burgundy shirt and white shoes with white tie. He felt pretty cool when he wore those white loafers.

With striking silver hair and golden-brown eyes, Dad’s friends jokingly referred to him as “The Gray Fox.”

Joking with his buddies

Giving Dad’s wardrobe to charity was difficult. So much of his personality was evident by what he wore. At home he preferred T-shirts and powder blue jeans. He wore them until the denim became soft and thin as old sheets.

button-down shirts, making it easier for his aides to dress him. His loafers have been replaced with Velcro sneakers to accommodate the miles he wanders up and down the corridors each day.

In my mind’s eye, I still see Dad on the dance floor, dipping and swaying with Mom, that constant smile on his face. Personally, I could never keep up with his creative dance moves and often stepped on his toes, but he’d just laugh.

Laughing came easily to Dad. I remember how successful he was with his daily challenge to get someone to laugh with him. Having been one of his prime targets, I feel partially responsible for his having achieved that goal.

Dad’s easy-going, fun-loving manner was contagious; he always knew how to have a good time. Whether he and Mom were on a cruise with their friends or simply on a Sunday drive with my brother, sister and me, he never failed to enjoy himself.

The things Dad loved most, though, were the simplest. He was happiest at home puttering in the yard. On summer afternoons, we lined up to challenge him in a game of ping-pong. The loser had to make a running dive into our Dough-Boy pool. The hotter it was outside, the more he seemed to lose. During summer months, Dad lived in that pool. 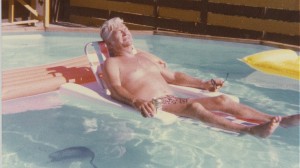 Most of my memories of Dad come to life in particular scents and sounds. Pine reminds me of the summers we spent at Lake Tahoe.

Oddly enough, gasoline odors bring me back to our boat, “All Hours,” and to Lake Berryessa, where we spent most Sundays from July through September.

The smell of freshly mowed lawn transports me back to Saturday mornings watching cartoons while Dad pushed the old mower out front. The scent of lawn clippings filtered through the screen door into our living room, 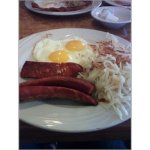 blending with the aroma of the Linguica and eggs Mom was cooking. Giants baseball, with Lon Simmons, blared from the radio on the porch.

Now at family events, I hear echoes of the sound of Dad’s knife on his wine glass when he clanged the goblet before

one of his many toasts. I can still taste those gin fizzes he concocted for us at Christmas. I smell the

smoky barbecue that filled the backyard with the scent of one of his many inventive marinades. And I always picture him wearing those ever-present sunglasses.

I think the trait I respected most in my father was his ability to accept people as they are. Growing up in the ’60s, I was a die-hard tomboy, playing football and climbing trees with the neighborhood boys. Nothing was more painful to me than playing with dolls.

But instead of insisting I behave more

like my sister, Dad played catch with me after work and bought me a train set for Christmas.

I never knew my father to have an enemy or even to say a harsh word about anyone. He was compassionate and forgiving, sensitive and kind; I admired his character. If success can be measured through the love of family and friends, a generous heart and a positive attitude, then Dad was the most successful man I’ve known.

Today, even as his disease progresses (gradually taking a little more of him away) his innate spirit remains. Alzheimer’s hasn’t yet taken his smile.

Dad use to call me sweetheart, but since he can rarely speak now, he mostly just stares and smiles. Sometimes when I’m feeding him, I look for that spark of recognition in his eyes. Occasionally, he’ll put a few words together and catch me off guard.

Once last month during lunch, he looked up from his plate and with absolute recognition exclaimed, “I’ll be damned!” when he saw me sitting there.

When my visits at the nursing home are over, Dad doesn’t watch me leave. He’s usually headed for the nearest bedroom window to look out into an unfamiliar yard. But that isn’t how I’ll remember our goodbyes.

Instead, I think back to that evening in April. It was the night before Dad left their home for the last time. I helped Mom pack and label his clothes for the nursing home.

He stood at the patio window, looking out at the backyard deck where his cherished pool had been. When we were through packing and I headed down the path toward my car, I could barely breathe.

As I pulled away from the curb, I was surprised to finally notice the empty space in the sky behind their home where the monstrous eucalyptus tree once stood. Then I remembered that a winter storm had uprooted its massive frame. 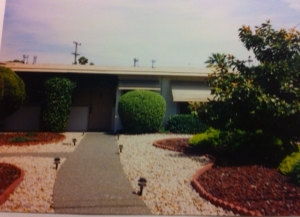 The front lawn was gone now too, long ago replaced with maintenance-free rock and mounds of drought-resistant plants. Spring was in the air, and so was that familiar scent of honeysuckle.

Mom and Dad stepped out onto the porch and I saw that she was holding his hand. He had a big smile on his face and they were both waving.

How I remember Dad – relaxing with a vodka gimlet at Tahoe

15 thoughts on “In My Mind’s Eye: Remembering Dad”