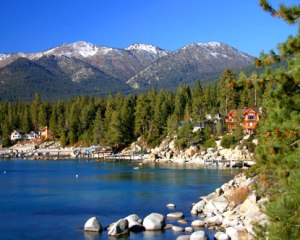 Three friends and I went to Lake Tahoe last month to cheer for our friend Patti; she rode 100 miles in the 22nd annual ‘America’s Most Beautiful Bike Ride’ for the Leukemia Foundation ‘Team in Training.’ I’m exhausted just thinking about it. Patti trained for months to complete the ride so we went to support her at the finish, whether she crawled or rode across.

I could tell the 3-day trip would be one with very little exercise from Hilary, JT, Annette and me. We planned to compensate for all the energy Patti expended on her ride by doing absolutely nothing.

So at Hilary’s home, we immediately headed out to the back deck, drinks in hand, and continued our discussion about how everyone lies. Well, not us. But pretty much everyone else.

Let’s pretend this is Hilary’s deck

After relaxing, we headed out to The Cantina, a local Mexican restaurant where we attempted, unsuccessfully, to convince our waitress to give us the recipe for their Lime-Cilantro Vinaigrette. It is, in a word, stupendous.

We threatened the waitress with no tip. When that didn’t work, we promised an awesome tip; still no dice. We considered getting her drunk with us so she’d divulge, but in the end I simply pretended to weep. I tell you, this woman was like stone; she never broke (damn her). So  we left with only breath mints.

The next day we continued our laziness with a leisurely breakfast at home then headed out for some clothes shopping before hitting the beach. We converged on the store like ants at a picnic, each of us heading to our favorite area. I bought boring items I actually needed, like washcloths (yawn), but the others purchased fun, frivolous stuff, like purses.

Needless to say, we never made it to the beach. Instead, our shopping spree triggered our appetites

(surprise, surprise) so we carbo-loaded in honor of Patti, who was 6 hours into her ride at that point. Here’s to you Patti. You go girl. Pass the pizza please...

After lunch, we headed home to make ginger-coconut martinis in order to toast Patti at the finish. We brought along fancy glasses because everyone knows martinis just taste better in them. We loaded the SUV with chairs, umbrellas and a cooler. There would be no standing while waiting for Patti to cross the finish. Come on, that would be way too tiring.

Waiting, in style,  for Patti

We set up our cheering section near the finish line. And we waited. And we waited. Then we got a text from Patti saying one of the ladies in her group was suffering from heat stroke.

Since you never leave a team member behind, they stayed for the support van to arrive to take her for treatment. It would be at least another hour before we’d see them finish.

Patti (far right) and her team

With that revelation, Annette gleefully dashed into the casino to try her luck. But I’m not implying the woman has a gambling problem, although she did seem overly enthused if you ask me. 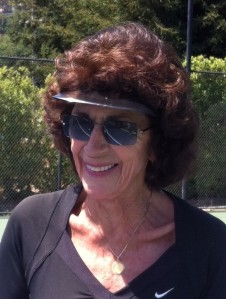 Overly enthused? You be the judge

Anyway, the rest of us started on the martinis early (yippee). We cheered loudly for those who finished, with each group wearing an ornament on their helmet to represent their area of the country. Patti’s team sported wine goblets for Northern California.

Now don’t get me wrong; sitting around most of the day is harder than you’d think. It sounds easy but in fact it’s quite tiring. We were there for our friend though, so you make sacrifices.

Our day involved a lot of lounging, drinking, talking, eating and imagining what Patti was feeling after 10 hours on her bike. (My guess: utter exhaustion and the desire to throw said bike in the lake.)

Two hours after we set up at the finish line, Patti’s team pedaled across. Or shall I say coasted? Regardless, every one of them beamed with pride. Let the hugs and toasts begin! 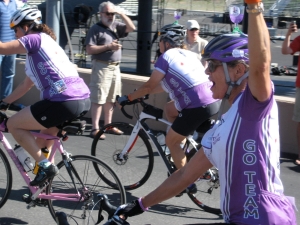 About 3500 bicyclists pedaled around the lake, into Truckee, and back to the casinos that warm day. Around 1200 of those were from Team in Training. Quite inspirational, wouldn’t you say?

Caught up in the moment, I told Patti I’d join her in the event in 2 years, when we both turn 60. So my question now is: What was I thinking? Answer: Apparently I wasn’t. I’m just hoping Patti has a short memory.

Afterward, we headed home for dinner. God forbid we go without a meal. Later, Annette and I lost to JT and Hilary in the game ‘Catch Phrase,’ we watched some ridiculous program on TV, and one of us (who shall remain nameless because she’ll hurt me), ate 4 bowls of chocolate peanut butter ice cream.

The next day we left for home from our food and drink-filled weekend, but not before stopping for lunch at a little place with incredible pies just like Grandma used to bake. Who can resist that? More importantly, who would want to?

Anyway, I now need to shop for pants a size larger to accommodate the poundage I just acquired and those I’ll  undoubtedly gain this month when 6 of us head back to Tahoe, continuing where the 4 of us left off.

Come to think of it, I believe a visit back to The Cantina is in order. 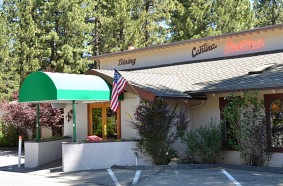 Home of the secret recipe

This time we’re going in with reinforcements and a sure-fire plan to get that vinaigrette recipe. What that plan might be, I have no idea.

But by God, this time we’re leaving with more than breath mints.