My friend Patti and her hubby rented a cute beach-front home last week. While Kent was at work (poor guy) Patti invited some of the gals out for a day of fun. In order to alleviate any boredom our friend might incur all alone out there, we did what any good friends would; we quickly headed out to join her before she changed her mind.

When the seven of us descended upon Stinson Beach, just an hour from home, our gracious host greeted us in the driveway. Let the fun begin!

The adorable house was a mere 30 yards from where waves lapped onto shore. Just beyond, beginner surfers in wetsuits struggled to stay on their boards. Although the day started overcast (often the case near the ocean) by 1:00 p.m. it cleared with glorious blue skies. Lucky us.

Usually when this group gets together, a lot of consumption takes place. On this day, it was food we devoured, not liquor. We aren’t total lushes, you know. After all, it was daytime. We save our lushing for nighttime.

Anyway, we started the day on the patio facing the ocean. Patti’s dogs, Leo and Lily, watched for other canines that dared enter their line of sight. All bark and no bite, they’d run toward an oncoming dog then hightail it back to the sanctity of Patti’s lap should the dog take a step in their direction. 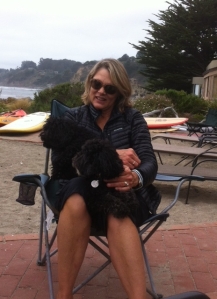 Patti with Leo and Lily, the invisible dogs (hey, I’m not the best photographer)

We converged on the patio surrounded by sea haze and engulfed chips and guacamole, hot artichoke dip, an assortment of cheeses, crackers and smoked salmon caught nearby. And those were just the appetizers.

Then, because that wasn’t quite enough, we had homemade chocolate chip cookies, homemade blueberry crumble, mini coconut cupcakes and mini chocolate cupcakes with cream cheese frosting. I know, pretty decadent, huh? As usual with us, it was a veritable food-fest.

Hilary takes a photo of lunch with Annette, Ayako, Patty, Laura, me, Patti and Kathy

Now don’t get me wrong; eating isn’t all we did. In between stuffing ourselves silly, we walked the beach and talked. Conversing is another activity in which we never tire. There’s rarely a moment of silence between us, unless of course, we’re stuffing ourselves. 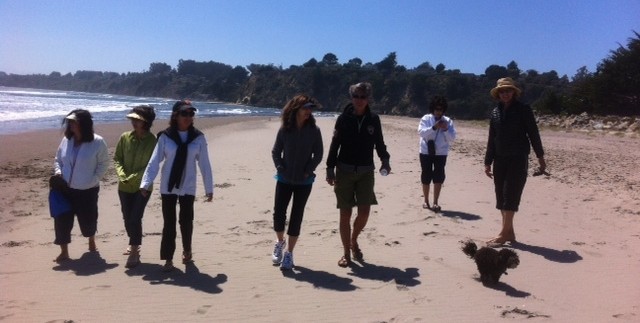 You just never know what topic of conversation will present itself with these particular friends. No, we didn’t have in-depth discussions about current world affairs or how NASDAQ is faring.

On this particular day, our theme was underwear. Yes, you read that correctly – undies. This subject may not be as educational or intellectually stimulating, but if it offers more opportunity to laugh, we’re in. 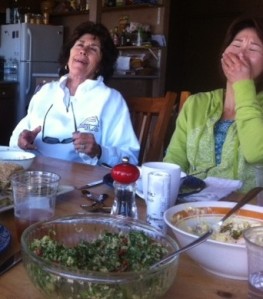 Hilary recounted the time her husband Justin was sitting in a business meeting when he felt something slipping down his arm under his shirt. Apparently while in the dryer, Hilary’s underwear clung to the inside of his work shirt.

Instead of being forever teased by removing said undies in front of co-workers, Justin pushed them further up his sleeve (good thinking). Since he and Hilary worked for the same company, he so thoughtfully deposited her underpants on her desk later that day.

Four words for whoever does the laundry in that household: Cling Free static sheets.

Then Kathy shared how she was walking into a party with a group of women one night when she felt something similar to Justin’s predicament, only the laundered thong was inside her pant leg. Kathy, however, kept walking until it slipped past her ankle onto the sidewalk.

Quick hands on the tennis court came in handy here. Kathy scooped up the evidence so fast nobody seemed to notice. Lucky for her she wasn’t with our group when it happened. We most definitely wouldn’t have missed that. In fact, I’m relatively certain a fitting nickname may have followed her for eternity.

That led us to Lydia (since moved) and the topic of how she wore a thong while playing tennis. Don’t ask how we discovered that. I’m still trying to forget the image. I used to wonder where she put the extra ball when serving, but actually I’d rather not know. Let’s just pretend it never happened, shall we?

Anyway, that was our day at the beach. While others had to work, good friends consumed a great lunch and decadent desserts, followed by a leisurely stroll on a lovely warm summer afternoon along the picturesque shore lining the Pacific Ocean.

And with that incredibly long, run-on paragraph, I believe I’m just about out of adjectives to describe the afternoon.

Wait, here’s one more: How lucky are we?

Baby spinach and mixed greens (as much as you like); 1 large red apple, chopped; 1/2 cup Cranraisins or dried cranberries; 1/2 red onion (or more to taste) finely chopped; 1/2 cup slivered or sliced almonds, caramelized in pan with 2 TBS sugar. Cool on foil.

Put greens in a bowl, add all the goodies and drizzle with dressing and toss. Enjoy!

5 thoughts on “A Day at the Beach”