Let me set the stage: Having 5 animals, 3 of which are canines, I don’t relish being a door monitor whenever they need to do their business or chase butterflies in the backyard. No, I prefer the lazy-ass way of letting them out – a dog door; the epitome of convenience.

So my dogs and 2 cats come and go into the backyard as they please. At night I selfishly leave their door unlocked so my rare blissful slumber isn’t interrupted. On occasion this causes some excitement when a brave raccoon visits for a snack off the counter or, like last week, to tear into dog treats in the pantry. 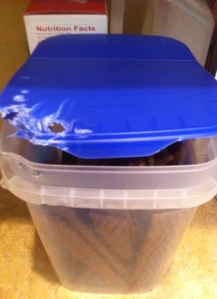 Okay, the stage is set…so I’m finally deep asleep, dreaming about hot fudge sundaes and the meaning of life (in that order). Suddenly, all 3 dogs awaken and look toward the bedroom door. So I follow suit. I’m thinking the raccoon probably returned for my home-baked cookies. (Just my luck to get a critter with a sweet tooth.)

So the dogs race downstairs, their barks echoing down the stairwell in their mad scramble toward the kitchen . The cats, on the other hand, hide under the bed. Then I hear a thud followed by silence. What the….?

I jump out of bed, run to the top of the stairs and there she is. Nellie, my Greyhound, is sprawled across 3 stairs, frozen and shaking. Did she see something that stopped her in her tracks? 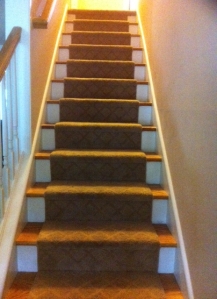 Scene of the crime

I step around Nellie, creep down the stairs and peek over the railing. Nothing. So I look back at her. That’s when I notice her hind leg is bent kind of funny on one stair, her belly is on the next, and her front legs on yet another.

She must have slipped when she tore down the stairs and was now afraid, or in too much pain, to move. My heart sank. Nellie’s my oldest pet and the closest to her expiration date. Vulnerable and scared, she was like a statue, except one that drools. I wondered how I’d ever lift her from the stairs to drive her to the emergency vet.

And why was she drooling? She must be in pain. I tried to gently move her leg forward but she resisted. So I simply cradled her while the other dogs watched from below. That’s when guilt came calling.

You see, Nellie is my couch potato yet hell-raising poop eater. The evidence of her existence is everywhere around the house – in the garden where she digs; on the sofa cushion she tore up (that I flip when  company comes);  on the corner of the buffet she chewed. And let me reiterate: she eats poop. 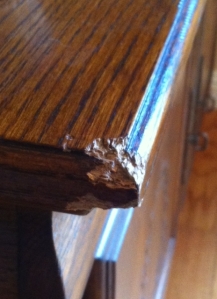 Now don’t get me wrong; I adore that damn dog. But I admit the thought recently entered my mind that when she crosses the Rainbow Bridge, I’ll buy a new sofa. I even wondered what style I’ll choose. I’m awful, aren’t I?

And now my big goof was sprawled on the stairs, obviously in distress. It was then that reality struck. I won’t have her much longer, will I? A wave of sadness hit me; I’d much rather have good old Nellie than a new sofa.

Before you despair, this story has a happy ending. Seems Nellie was simply stuck in an awkward position and too scared to move. Her leg was just fine. Not even a limp afterward. Kind of hard to believe since the poor thing resembled one of those twisted pretzels you buy at the mall. 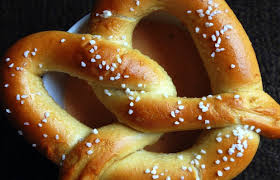 In the end I never did discover what originally caused all the commotion. (Note to self: lock dog door at night!)

And so around 5:00 a.m. I crawled back into bed. All the animals jumped on except Nellie, who lay within reach on the floor. So I put my arm over the side of the bed and stroked her back until she fell asleep. When I heard her familiar faint snoring, I relaxed and let myself slip back into blissful slumber.

And that was the moment I knew how grateful feels. 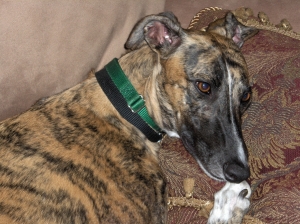 8 thoughts on “How Grateful Feels”