Just about everyone has a phobia, or pretty close to one. For some it’s a fear of flying, like for my friend Annette. We have to sedate her into a stupor before she’ll set foot anywhere near an airport. 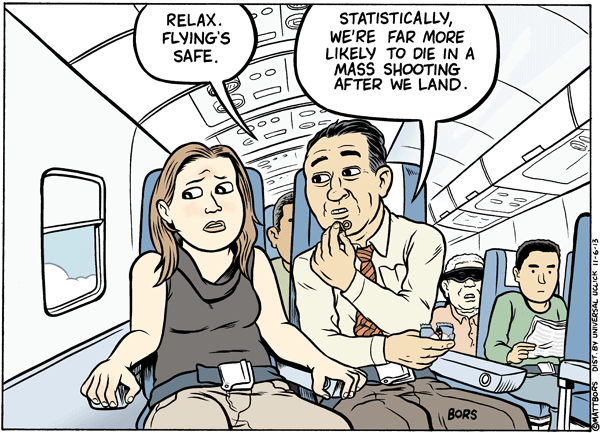 For some, their fears focus more on crawly things. My ex, Jim, would yell my name from the other side of the house in such a way I thought our home was on fire. Or maybe he found one of our dogs dead under the bed. But no; a spider was in the house and it needed not to be. I had a small window of time to scoop up said spider and run it outside before panic forced Jim to smash the arachnid to smithereens. 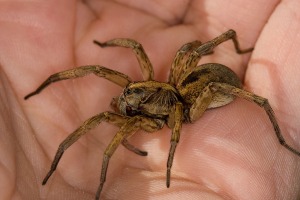 Let’s get you outside, little one

Then there’s Stephanie Lacsa from San Diego, who this week was plunging her toilet because the water level was higher than usual. Naturally, she assumed she had a clog. And what a clog it was. As Stephanie plunged her toilet, up pops a 5 1/2 foot Colombian Rainbow Boa. Can you believe that? You can bet from now on I’ll be looking into the toilet before sitting my tushie down on that seat. 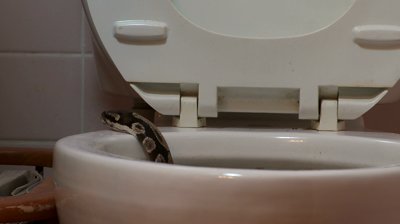 Hey, what’s all the commotion out there?

Off to a rescue group

Although not all phobias are rational, that doesn’t make them any less scary when we’re experiencing one. Some are just creepy little things we don’t want crawling on us or living in our toilets because, well…they’re creepy. And when movies are made about killer arachnids and snakes on planes, that just compounds the fear.

NOT your oxygen mask

I’d have to say snakes are my irrational phobia. I can’t fault them for being slimy, slithering creatures but that doesn’t mean I want them slipping into my sleeping bag and getting all chummy with my ankles. So I keep my distance when at all possible, which is pretty much all the time.

Now don’t get me wrong; my being afraid is not based on a past snake attack (thankfully). It’s derived solely from ridiculousness. And although spiders aren’t something I particularly enjoy, it’s those the size of my thumb that make me shudder. Plus poisonous ones. I admit, I don’t love those. And that’s why I’m questioning visiting Australia next fall. 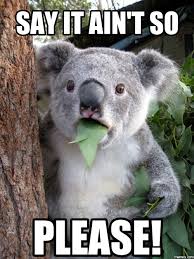 Visiting Down Under has always been at the top of my bucket list. Now that my friend Sharon lives there, I have no excuse not to visit. Or do I? Seems in Perth, where she lives, it’s not all cuddly koalas and cute kangaroos. They also have these poisonous spiders called Redbacks that actually kill snakes. If you ask me, that’s enough to validate anyone’s fear of spiders. I mean, come on!

Last week Sharon emailed me this story: An office receptionist arrives to work one morning and discovers a 2-foot long snake suspended off the ground, entangled dead in a poisonous spider’s web. A bite mark on the snake’s tummy showed where the spider began to eat the snake, probably the very night she caught it.

Ms. spider then continued to spin her web around her prey, simultaneously rolling up the snake while lifting it higher off the ground. Can you imagine watching this transpire next to your work desk? Me neither. Anyway, while doing this, Ms. spider continued to munch on the snake until days later when it was rendered practically hollow. 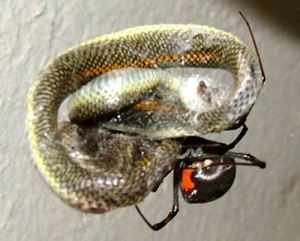 Yes, there are lots of scary things out in the world. For me it’s snakes and from this day forward, any arachnid bigger than a nickel. Oh, who am I kidding? Any spider I find in my home larger than a dime and I’ll probably run screaming like a little girl.

That’s because another phobia of mine is being suspended high off the ground, entombed in a massive spiderweb.