I’m thrilled to report that we’re making progress. And by WE I mean my two problem children, Skip and Wally. In case you haven’t met them, I’ll introduce you… 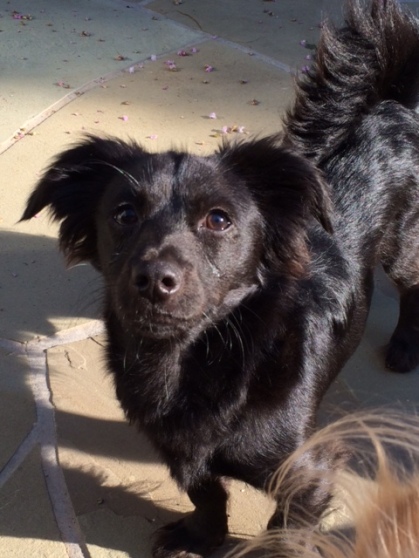 I adopted Skip 5 years ago after we crossed paths at Marin Humane. Late one night I was bringing in feral cats I’d just trapped for sterilization at the same moment a volunteer carried in Skip from a rescue run in middle California. It was love at first sight — I knew in that instant I had to make him part of my furry family.

Wally is my latest addition, added last August to round out my other 7 adopted rescues (3 mutts and 4 felines). What can I say? Again, love at first sight. While at Berkeley Humane picking up a food donation for Marin Friends of Ferals, I saw a volunteer walking Wally.

Walking is too benign a description for Wally’s gait. More like he skips with determination and utter joy. One couldn’t help but notice him leading the volunteer, his little body pulling the poor guy down the sidewalk. Give that volunteer a skateboard and he’d have had the ride of his life. 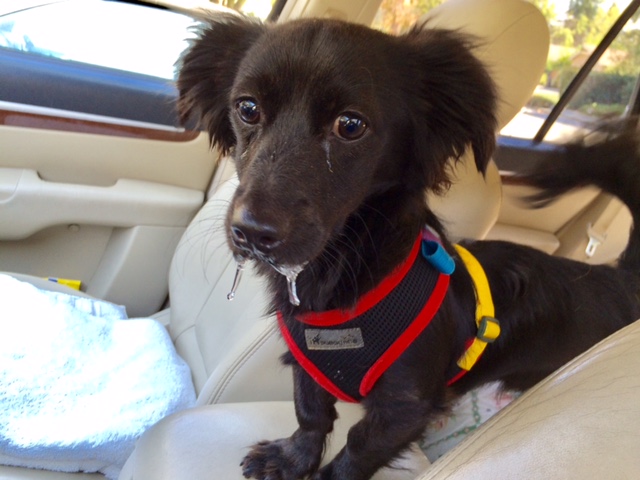 But one can never judge a book by it’s cover, can one? Although both dogs are adorable, Skip and Wally have issues. But then, don’t we all? I try to work around them, but not always successfully I might add. No doubt Wally’s first adopter returned him not because he gets car sick (he does) but because he’s selective on where he likes to, shall we say, eliminate.

Now don’t get me wrong; I’m not picky about my animals using a particular area of the backyard to do their business. I simply prefer it be IN the backyard and not in the house. Is that too much to ask? Both Wally and Skip don’t get it, unlike my other mutts Nellie and Bailey. But these two are slowly making progress. Not nearly fast enough progress for my liking, but progress none-the-less.

Skip is now using the door dog on frequent occasions and even comes back through it, an act previously virtually nonexistent. He’s petrified of going up those 2 little steps leading back inside but he’ll bound up the 13 to get upstairs without a second thought, or even a first one. Don’t know what changed, but I’m thrilled. We’ll see how long it lasts. 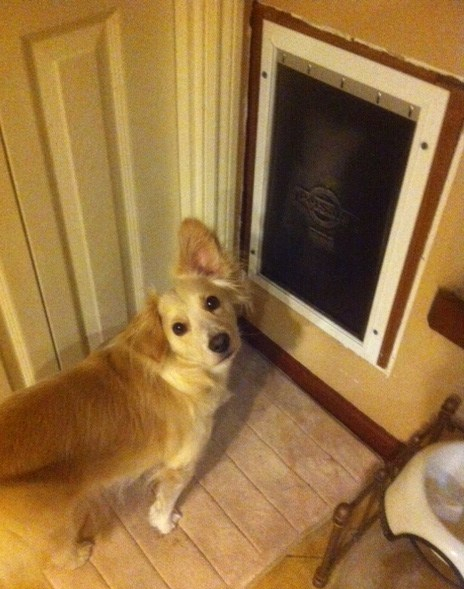 As for Wally, I had him in a belly band for months but haven’t had to put one on him lately. Either he’s tiring of annoying me or he’s finally catching on. Since he squats instead of lifting his leg when he pees, I tried to outsmart him by buying plastic runners to place in the 3 spots where he’d leave me little surprises.

Personally I like these runners better than pee pads that look like fake grass. Plastic is easier to clean and not as noticeable. Best of all, it seems he doesn’t like eliminating on them, so it’s gotten to where I rarely need to check them anymore.

But that changed a couple nights ago when I headed upstairs and promptly stepped on something wet by my bed. You guessed it. A little deposit of pee…Wally’s calling card. And here I thought I’d outsmarted him. But instead, he’d done it to me by simply doing his dastardly deeds upstairs.

But I have a plan! Tomorrow I’ll buy more plastic runners for my bedroom. That’ll teach him. Or will it?

Somehow this doesn’t ring true to me

One thought on “My Furry Problem Children”