I’m writing this on Friday afternoon sitting in my SUV in front of a home I’ve come to know much too well the last 41 days. In fact, I think I’ve been here more than my own home lately. Now don’t get me wrong; that’s a lie. But it feels true.

I’ve been on the hunt for a mom and her kittens with Constanza, our San Rafael volunteer coordinator for Marin Friends of Ferals. I’ve been doing TNR (trap-neuter-return) for 15 years and I’ve never encountered a smarter cat, feral or domestic. And THAT’S no lie.

On April 18th we received calls about a mom and kittens in a neighborhood in San Rafael with a view of the bay. It’s a community with perfectly manicured yards and backyards that adjoin a golf course. Multiple callers reported seeing her moving kittens from house to house. And so began the hunt for one smart cookie and her 3 kitties.

Ruby and her kittens

We placed flyers under doormats requesting residents not disturb Ruby (the name we gave her) or her kittens, but to alert us when they’re seen. That’s how we met Lily, a sweet woman who saw Ruby in her yard and was happy to let Constanza trap train her with food. But soon Ruby headed next door to Pam’s so Pam began feeding daily. Ruby then moved across the street to Lee’s. You get the gist… 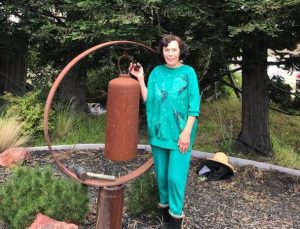 We learned Ruby was a longtime neighborhood cat nobody claimed to be feeding. Rumor was her owner died so she’s been on her own, continually pregnant. She’s quite the survivor since this area is laden with coyotes, especially on the golf course, Ruby’s route to backyard properties.

The last 41 days we’ve met a variety of friendly residents taking walks, dogs in tow. Everyone smiles and waves. I feel like I’m in an episode of The Andy Griffith Show. Seems residents know what we’re up to, often stopping to inquire about our progress, which hasn’t been much.

Ruby seems always a step ahead of us. The second we’re ready to trap, she moves her kittens again. She’s a feline vagabond we continually search out and find. A couple weeks ago she moved 8 houses away from Pam’s. That smart cookie chose the neighborhood’s only neglected property with lots of hiding places. It also harbors a grouchy old guy who prefers we not step foot on his property.

Lily, who knows everyone, contacted Mr. Grouch for us. It took a while for her to persuade him to allow us to trap there. Apparently she’s a born negotiator. Anyway, we finally caught a 7-week-old cream-colored kitten and moments later, a gray one. The black kitten, however, takes after Ruby in the smarts department by continuing to elude us. We have 4 traps set today yet hours later the little bugger is still missing in action. But it’s just a matter of time… 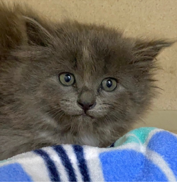 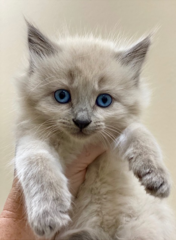 Ruby then moved her remaining kitten to Mary’s, the grouch’s next door neighbor who graciously let us trap Ruby this morning. Ideally, we prefer to get all the kittens first but we worried she’d continue hiding the last one and we might not find it. (She’s a very protective mother.) But we know the area where she put the kitten. So tomorrow is T-Day (trapping day).

Ruby is at Marin Humane now. After being spayed, she’ll be re-homed to a property where she’ll no longer need to hunt to survive. And her kittens are already in foster care with adopters waiting in the wings. I’ll be back out there tomorrow morning at 6:30 (ugh!), when our camera revealed the kitten emerges from hiding.

It’s been a community effort catching these felines and the absolute longest it’s ever taken us to do it…41 days and counting. All because of one smart cookie. 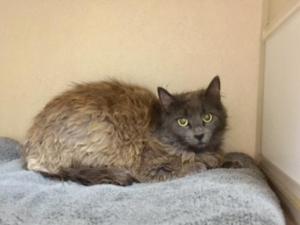 Update: On Sunday afternoon at 4:00 p.m. we finally caught the third kitten! He’s doing great and will be up for adoption soon.