I believe in omens. And after what happened on New Year’s Day, I haven’t wavered on that. Here’s what happened:

I decided I was done with Christmas decorations. Time to take down the outside house lights, remove the stuffed reindeer from my porch and toss the front door wreath. 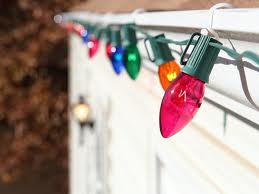 When finished there, I headed inside to gather up the overabundance of holiday crap adorning pretty much every corner of my home. I swear I could open a holiday boutique with what’s stored in my shed alone.

Anyway, I grab an old family ladder, so rickety it appears a soft wind will shatter it to pieces. This ladder is a good 40-years-old. I remember it from when I was a kid and my dad used it to paint our house. 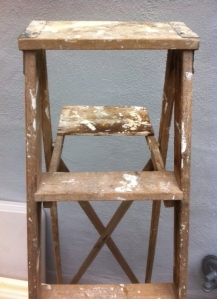 My neighbor Paul, who is the best kind of neighbor because he’s incredibly handy and helpful, is always telling me to “get rid of that piece of junk before you hurt yourself.” And he’s right. But because it has sentimental value, I’ve held on to it.

Anyway, Paul sees me about to get up on Old Rickety and immediately gets his sturdy, light-weight aluminum ladder and brings it over. “Use this before you kill yourself.” So I did.

But for much of the time on that ladder, I had a feeling that something might happen. And not something good, like spotting a $100 bill in my roof gutter. No, the thought that I might fall off was pestering me in the back of my mind. I heard my mom telling me: Be careful sweetheart.

Since I’m athletic, I don’t usually worry about that kind of thing. Now don’t get me wrong; I don’t think I’m indestructible, just generally not a klutz. I suppose I expect if I fall, I’ll just tumble, roll, and pop up like a stunt woman on a movie set.

So I continued down the line of lights from my garage to my office window at the other end. Once there, I got off the ladder and shimmied with my back against the house along a brick ledge, holding onto the gutter as I went. No problem.

When done, I headed inside, relieved that my foreboding thought was a false alarm. But first I must get myself a latte because I adore my Christmas present to myself (the Nespresso Essenzia).

I make a latte in my favorite glass mug and head upstairs to get my iPhone.

I notice, as I’m heading downstairs, that I have a text saying it’s a friend’s birthday. Sipping my latte while reading the text (pretty stupid), I’m oblivious to where I’m stepping. And that’s when it happens.

Around the third step from the bottom, my heel hits the edge of the step. My ankle rolls to the side and suddenly I’m sailing toward the hardwood floor.

PLOP…I land on my side. So much for tumbling, rolling and popping up. But the funny thing is I never let go of my latte. (I have my priorities.)

With coffee puddled around me, my dogs come running and lap it up like doggie crack. Lying there, I realize how wrong I was thinking my omen was erroneous – that I was in the clear after getting off the ladder.

Seems I simply had the wrong venue in which my omen would occur.

You see, whenever an omen strikes, I think it’s my guardian angel mother attempting to get my attention. What can I say? She’s protective, even on the other side. I can just hear her: Janie Mae, you do too much. You have to slow down and be careful.

Anyway, my ankle is sprained, so now I’m hobbling around. Guess I am a klutz after all. But you can bet next time I have an omen, I won’t assume when or where said catastrophe might happen, only that it will.

Even when the day is over and I’m safely tucked in bed, drifting off to sleep, I won’t be surprised if my bedroom ceiling fan crashes down on me. 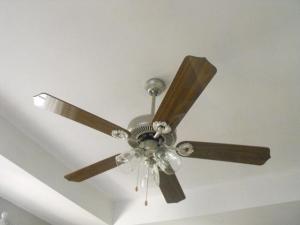 If I’ve learned anything from this, it’s that omens never lie. 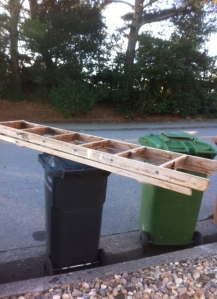