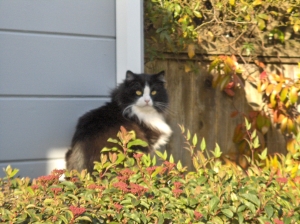 My cat Oliver likes to bring me presents. But not the good kind like a bracelet or See’s milk chocolate Molasses Chips. No, he prefers gifts that are alive, such as the mouse he once brought to my bedroom.

It happened while I was drifting off to sleep. I felt something squirming in my pillowcase. Can you imagine? I’m sure the mouse was hiding from Oliver and I don’t blame him one bit. But talk about nightmares…

Oliver, wouldn’t you rather eat tuna?

So now that you know this, here’s how a recent day went:

In the morning, my darling Oliver (and I use that term facetiously) brought me that oh-so-enjoyable present, a twitching lizard tail. No lizard in the immediate vicinity. But the tail was moving like mad, to and fro, flopping about on the hardwood floor.

YUCK. Let me say that again…YUCK. If you’ve ever picked up a live (but detached) lizard tail, you know what I mean.

I’m tempted to keep Oliver indoors all the time (partly for this reason) but he would be miserable. When I adopted him, he’d been living as an outdoor cat in a backyard. Thankfully, he mostly prefers being inside, warm and comfy on the ottoman.

But when the weather is nice, Oliver uses the pet door to head to the backyard, where he lounges on the patio or on the terraced hillside. He eyes anything that dare enter “his” yard, so most of the crawly things don’t enter anymore. But I digress…

Come closer. I dare you

So later in the day, I’m headed for the kitchen when what do I encounter in the family room again, staring intently at the baseboard under my wine cabinet? Yes, you guessed it – my generous-to-a-fault, Oliver.

Apparently, his gift of morning-lizard-tail wasn’t enough to show his love and affection. No, this time he had to bring me the ultimate in gift-giving – a snake. Yes, you read that correctly, a real LIVE snake.

I readily admit I have a bit of a phobia about these critters and here I was faced with a 2-foot-long skinny orange scaly crawly thing trying to burrow under my baseboard!

After screaming in disgust for the second time that day, I ran to the kitchen and got my handy Tupperware I keep for just these occasions. (I don’t store food in my “rodent plastic” but my eyes are failing, so you never know.)

So while Oliver attempted to get the snake in his mouth, I tried to scoop it up in my container. But that wasn’t working and said snake was getting away. It was somehow squeezing between the carpet and baseboard and would soon be out of sight. And then what?!

So I did the only thing I could, which is sure to give me additional nightmares. I grabbed the snake by the tail and pulled it out from under the baseboard before it shimmied out of reach. I’m sick just thinking about it.

I finally got the snake out in one piece and quickly dropped it in the container. I then sprinted to the knoll across the street (far from my bedroom) where I released it.

When I returned, Oliver was still in the family room standing guard near the wine cabinet, sure the snake was still under there. (I hope he doesn’t know something I don’t.)

What do you mean I can’t go out?

Now don’t get me wrong; I realize I need to address Oliver’s gift-giving. In the meantime, he’s staying inside, right along with the tail-less lizard that may very well be hiding in my pillowcase about now.

So that was my day. How was yours?

PS…the lizard appeared the next morning, on the third shelf of the kitchen pantry, right at my eye level. He sat staring back at me, wedged between the oatmeal and olive oil. Once I recovered from shock, I scooped him up in my trusty Tupperware and delivered him to the knoll, where I imagine he and the snake are living happily ever after.

2 thoughts on “The Joys of a Generous Cat”