We all have secrets. If you think you don’t, then you’re being secretive. Naturally, some secrets are juicier than others. Now don’t get too excited; my secrets aren’t all that juicy. You won’t learn that I’m in the Witness Protection Program from testifying at a mafia murder trial in Chicago. No, my secrets pale in comparison. Here, I’ll show you… 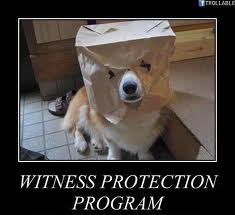 Secret #1: I have a touch of OCD (Obsessive-Compulsive-Disorder). Personally I think we all do, to varying degrees. Some of us become incapable of living productive lives because of it. Fortunately, my OCD is more quirky than debilitating. You see, I like to have things in order, like in my cabinets, drawers and closets. 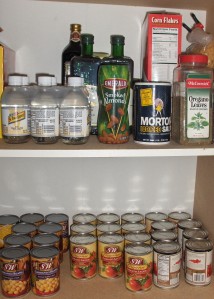 When I stack items in my pantry, I like the labels to be facing forward. Call me crazy. I prefer the cans be in rows on the shelves, not willy-nilly like playing Jacks. (If you don’t know Jacks, you’re a youngster.) 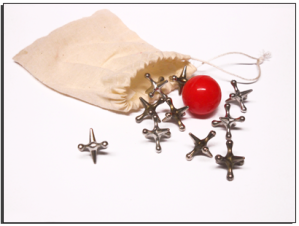 Sometimes my friends jokingly move things around. Someone without OCD could leave it that way. Not me. I can’t resist straightening them back into rows, labels facing forward, of course.

My closet is the same. I have my blouses organized by color. I wouldn’t dream of putting a green blouse in the beige blouse section. Call me weird; I’m okay with that. Now don’t get me wrong; it’s not like my palms get sweaty and I start hyperventilating if things aren’t totally organized. I’m not Howie Mandel you know. (Look him up.) 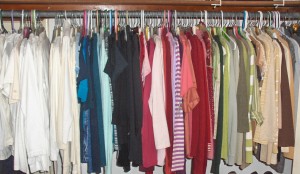 Secret #2: My dog skip is intellectually-challenged. That’s a polite way of saying he’s on the dense side. Ever since I got a new dog door, Skip can’t figure out how to go outside. Maybe because the seal is tighter, he thinks it’s a door. So he sits before it and stares, willing it to open. The thing is, once he’s outside, he goes back in just fine. It’s the going out he has trouble with.

I’ve tried everything I can think of, including peanut butter on the door-flap so when he licks it, the flap will open. Enticing him with a treat doesn’t work either. Skip will only go through that door when I hold it open for him. Subsequently, he’s taken to wearing a belly band to avoid the “accidents” he’s been having indoors. Ideas, anyone? 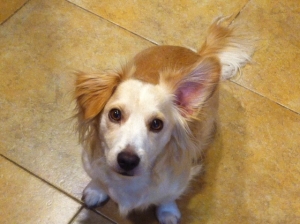 Secret #4: I find it absolutely impossible to go to a movie and not order popcorn. It doesn’t matter if I’ve just finished a huge meal, including dessert. I might be bursting at the seams when I enter that theater but I’m still heading for the concession stand. To me, a movie without popcorn is like a birdbath without water. I mean, what’s the point? PS…I also sneak in a can of soda. Shhh… 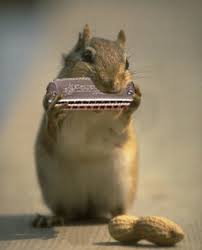 Secret #6: This past month was the first time since I’ve had a checkbook where I was unable to balance my account. It’s so far off I’m at a loss for what to do. I’ve spent hours going over everything, to no avail. I’m at the point where I think I may need to close my account and start again. 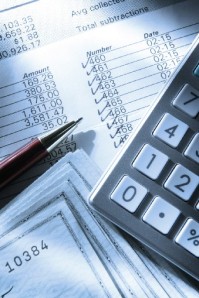 Secret #7: I am thoroughly addicted to the Dilettante Chocolate Coated Dried Bing Cherries at Trader Joes. I’m here to tell you, these things are incredible. You HAVE TO try them. Not the Trader Joes brand, but Dilettante. They’re not even close to those chocolate cherries with the icky liquid center. 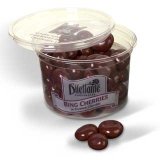 Anyway, I only allow myself three of these a day. I’m not a glutton, you know. But I look forward to my treat and savor every bite. If I could choose my last meal,  Dilettante’s would be dessert. And you can bet I wouldn’t eat only three.

So there you have it; my secrets of the month. There’s many more where these came from but I’ll bore you with them at a later date. Now if you will excuse me, my intellectually-challenged dog is waiting for me to hold open a perfectly functioning dog door.