Last week I clipped my fingernails almost down to the quick, where barely any of the white parts show. Why, you might be wondering, did I do such a thing? I thought you’d never ask. And I have a very good explanation for that. Pain. It has to do with pain. I’ll explain…

As you know, I’m dealing with this damn back of mine to the point I’ve not been able to exercise in over 4 months. Boo-hoo. As a consequence, my body now closely resembles the blubber in the movie, Flubber. Except I’m not green.

And as an added bonus, I’ve gained 5 pounds. Yep, I finally broke down and weighed myself with my super-duper-never-wrong-bathroom scale. I wish I could call it a liar but sadly, it’s honest to a flaw.

Anyway, I never figured just getting out of bed would be a challenge, but obviously I figured wrong. So this is what it feels like to be disabled, huh? Well, not anymore, ladies and gentlemen. I’m done with that baloney. My patience level reached its limit last week. As Popeye once said, “That’s all I can stands. I can’t stands no more.” 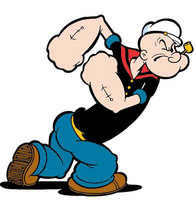 I’m with ya Popeye!

Doctor time! I figure she could finally verify what’s going on back there besides sciatica, which gets a kick out of traveling from my lower back, through my butt, along my hamstring and parking behind my knee. The Doc’s verdict: a possible tear in my upper hamstring (located at the sit-bone in the butt) from a tennis match months earlier. Did I mention I also have osteoporosis? I know, I’m a mess, right?

So I asked for a cortisone shot in order to resume exercising. Doc ordered an x-ray, then made me an appointment with an orthopedist. And this is where the fingernail trimming comes in to play. (I bet you thought I forgot about that didn’t you?) You see, I figure if a long needle will be injected into my butt, it’s doubtful they’ll have a handy piece of wood available that I can bite into to muffle my screams. So my plan is to dig my fingernails into my palms instead. I ask you, who wants half-moon scars from long fingernails?

The charismatic orthopedist pulled, pushed, poked, bent and contorted my leg every which way and announced that it’s not my hamstring causing the issue. The X-ray showed it’s something called an S-1 and L-5 closing of the vertebra in my lower spine. In English, that means my discs are collapsing, squeezing the nerve running through them. 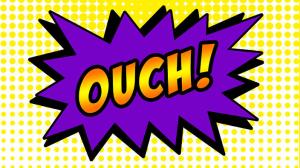 It appears trimming my nails was premature, as this Doc suggested I get an MRI next week to determine where exactly that long, thin, cold, sterile needle should enter so the cortisone hits the target. Like darts, you want a bullseye. Anything else and I could be paralyzed. Now don’t get me wrong; I just threw that in for dramatic effect. (It’s called creative license.) But still, I bet it could happen. Paralysis, that is. 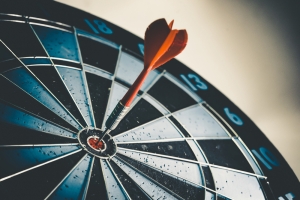 In fact, now I’m worried. Please excuse me while I google “Odds of paralysis from wayward cortisone needle.” We’ll have that answer next week if I’m writing to you from a wheelchair. Come on, bullseye!