Margo and Pam after a marathon

Last week, I left you hanging with my tale of Pam and Margo, my exercise-fiend friends. If you didn’t catch that one, I recommend you go back and read it so you’ll know where I’m heading with this one.

I tried to convey just how talented these gals are: they can (and do) literally run for hours and barely break a sweat. They leave swimmers in the wake of their powerful strokes and pass other bicyclists in the dust with hardly any effort. In other words, I’m jealous.

I consider myself a constant work in progress, exercise-wise. Next to them I’m incompetent but considered competitive compared to others not bordering on superwomen. If I can keep pace with Pam and Margo on the bike for 15 miles, it’s a personal victory.

Still, I do my best not to embarrass myself with them. When Pam and I did an organized biking event around Lake Tahoe (72 miles), I managed to keep up, but only because Pam insisted I pace her (make her go slower). She wanted to ride behind me so she’d conserve energy. Not a problem. Slower is one of my favorite speeds when tackling Lake Tahoe.

Pam, after our Tahoe ride

Me, after our Tahoe ride

My purpose for entering these events is simple: to see if I can push myself and not expire on the course. But maybe that’s just me. I think perhaps Pam and Margo want to win. And the thing is they actually could.

So anyway, the day of this particular sprint-triathlon, we headed out at the ungodly hour of 5 a.m., when sane human beings should still be tucked into a warm bed. We loaded all 3 bikes onto Margo’s bike rack then I settled in for a nap for the hour drive.

Picture a moonless night, pitch black on a mostly deserted freeway. A car pulls alongside us, the occupant honking. What’s that all about? But we kept going. 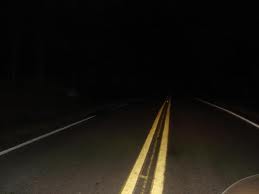 A few minutes later, the same thing happens. Hum. That’s strange. What’s going on? Then we hear an odd scraping noise and immediately pulled over. Turns out half my bike had slipped off the rack and was sliding down the freeway at 65 mph. Whoops. 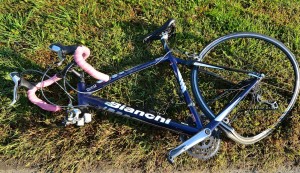 Needless to say, my triathlon had suddenly turned into a biathlon. Still, I suited up for the swim in the lake, emerging the same time as Pam and Margo. Will wonders never cease? They must have had leg cramps or something.

So as they, and over a hundred other competitors, hurried to get onto their bikes, I stayed to help the crew clean up the biking area while the ride commenced.

Later, I hitched a ride with a crew member to the running section and received permission from the race organizer to participate in that leg of the event. Obviously, I was eliminated as a rightful competitor but appreciated the opportunity to be allowed to run that leg of the race.

So I waited what I considered an appropriate length of time before jumping in among the other runners. I assumed Pam and Margo had already run by minutes earlier.

So here’s the thing; I assumed wrong.

I realized this mistake shortly after I ran along the open trail lined with supporters. They cheered me with enthusiasm, something I’d never before experienced. I figured they were just trying to encourage this old gal to the finish line.

Close to the end, an official ran out to meet me, requesting my race number. I told him my number had been eliminated so I was just running for fun. Don’t count me!

A couple minutes later, Pam and Margo crossed the finish line. That’s when I knew I’d definitely miscalculated the start of my run. Again, whoops.

But the real shocker came when my name was announced over the loudspeaker that I had placed 3rd in my age division!

Now don’t get me wrong; I

didn’t actually accept the award. What do you take me for? But just between you and me, hearing my name (although totally undeserved) was kind of thrilling. But I know I don’t belong up on a podium, and that’s okay with me.

My motto has always been, Focus on the journey, not the destination. Joy is found not in finishing an activity, but in doing it. So when I’m challenging myself, it’s really more about the experience (the long, arduous, often excruciatingly painful experience) of actually making it to the day of the event.

But, after erroneously crossing the finish line too soon, I’m now thinking the destination is a pretty awesome place too.

Especially when, as it turns out, you’re among the first to see it.